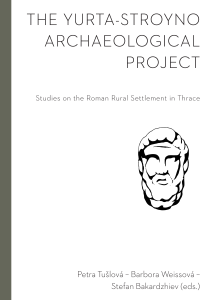 The Yurta-Stroyno Archaeological Project investigated a Roman rural settlement located along the middle stream of the Tundzha River, in south-eastern Bulgaria (Roman province of Thrace). The main objectives of the project were the determination of the habitation dynamics of the settlement, the investigation of its architectural appearance and general function, as well as its possible relation to the Roman military camp in Kabyle.
This volume brings together studies on the settlement’s investigation, including the excavation and surface survey, as well as individual articles dealing with different aspects of the settlement existence and material culture.