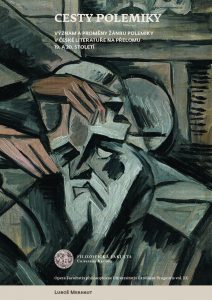 This monograph follows the Paths of Polemic, or Significance and Transformations of the Genre of Polemic in the Czech Literature at the Turn of the 19th and 20th Centuries. The studies, based on thorough analysis of the source materials, are focused, in a relative chronology and from a gradually changing point of view, using various characterising emphases and recurring motifs, on diverse cases and types of polemic, and also on the aspects of the polemic as a genre in Czech literature from the mid-1880s to the 1910s or 1920s. They observe, provide testimony to and interpret the following: discussions on national literature in 1886–1888; the possibilities and transformations of the notion of the
literary revolution in polemics at the end of the 19th century; the polemic concerning the work and personality of Jan Neruda as one of the concepts for organising public space in 1892–1893; the conceptual search for Modernistic (symbolist) artistic syntheses in the 1890s; the programmatic as well as personal polemical disputes between F. X. Šalda and those around the Moderní revue magazine, especially Arnošt Procházka and Jiří Karásek, in 1893–1925; the disputes concerning the significance of the work of Vítězslav Hálek, and the new concept of literature and art in 1894–1895; the polemical and political background of the emergence and influence of the ‘Czech Modernism’ manifesto as reflected in correspondence between J. S. Machar and T. G. Masaryk in 1894–1896; Masaryk’s polemical involvement in the so‑called Hilsner Affair in 1899–1901; an extensive dispute over the direction and significance of the 1890s’ generation in 1900 (the so‑called pseudonym polemic); the changes in the response to the work and personality of K. H. Mácha (especially in 1905–1910); the so‑called Anonymous Letters Affair and its context in 1909–1914; the picture of the opening of the Municipal House in 1912 in magazines as an expression of the contemporary artistic discussion; and polemic‑related events in 1913 as the culmination of the social and artistic processes of the previous decades and the sign of the upcoming fundamental changes. The individual chapters of the book provide the necessary room for authentic contemporary utterances, freed from the irrelevance or insignificance that historical research into critical
thinking traditionally evokes.