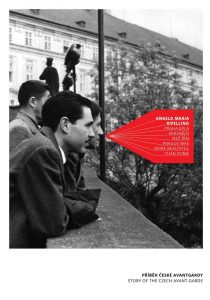 The History of Contemporary Czech Poetry (Storia della poesia ceca contemporanea), the first book by Italian Bohemist and Russianist Angelo M. Ripellino, appeared in four hundred numbered copies in Rome in 1950. It was a period in which many of the poets, critics and artists the author was writing about were persecuted by the Communist regime and left for forgotten. We find this seventy-yearold study interesting today not for its content so much as its style and composition. Ripellino’s understanding and interpretation of Czech culture is shaped by the link between art and literature (the book, dedicated to “Ela and friends of Group 42,” contains 19 reproductions of paintings). It was here that the young scholar first applied a critical method which remains largely his own, and which would become a central feature of his “essay-novel” Magic Prague (Praga magica, 1973). Ripellino built his critical discourse as a mosaic of critical meditations, citations, and contributions, and it is not by chance that after many years Ripellino would begin Magic Prague with a reference to Arcimboldo as his teacher – a painter he first learned about through Karel Teige. The History of  contemporary Czech Poetry represents a sort of precursor in embryo to Magic Prague, a work which Ripellino first considered calling Alchimia di Praga (Alchemy of Prague) – references to the “alchemy of the city” can be found throughout The History of Contemporary Czech Poetry. The present book coincides with the publication of Ripellino’s correspondence with Czech poets and artists „Do vlasti české“, ed. A. Cosentino („To the Czech Homeland“) and a catalog of the exhibition realized by Museum Kampa „Praha byla krásnější než Řím“ („Prague Was More Beautiful Than Rome“).