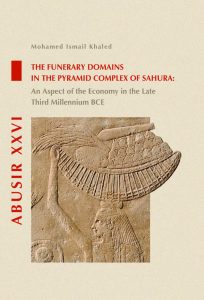 Our distribution offers various titles published or co-published by the individual departments of the Faculty of Arts.

The most important series:

The Abusir series provides in-depth and up to date information on the results of the archaeological excavations and research of the Czech Institute of Egyptology in the vast cemeteries of Abusir; a major site within the Memphite necropolis. The richly illustrated volumes cover three main areas: the pyramid cemetery of the Fifth Dynasty in Central Abusir, the Old Kingdom cemetery of nobles and priests in South Abusir as well as the Late Period (Twenty-sixth and Twenty-seventh Dynasty) shaft tomb cemetery located in between. The series provides not only the final excavation reports on tombs and pyramids, but specific volumes also deal with the funerary material uncovered, such as statues or papyrus archives, as well as specific iconographical aspects of tombs and temples. The material and data is furthermore placed within the larger context of the Memphite necropolis and beyond

The Pistiros series was dedicated to the archaeology projects in the location of the Greek town Pistiros in Bulgaria explored by prof. Jan Bouzek and his colleagues.

You can find all available titles in our e-shop.

Besides the faculty edition series, members of our academic community publish the results of their work through the Karolinum Press (Charles University publishing house), established in 1990. Karolinum publishes academic monographs and participates significantly in the production of the CU journals series – Acta Universitatis Carolinae (AUC). The journals issued by the individual faculties of Charles University cover a wide range of subject areas. Some of the journals have a tradition dating back to the nineteenth century, some are new and reflect the current needs of the university. The AUC is an important source of information on the current state of research in most of the fields studied at CU. The individual series have various periodicities and are published in the form of collective volumes or monographs. Original works and the independent review procedure are always emphasised. The articles are published in one of the world languages or at least contain foreign language abstracts. Thanks to extensive inter-library exchange, the AUC serves as an important link to the global academic community.

The series has a more than fifty-year old tradition; since 1975 it has been a reviewed specialised periodical with foreign language abstracts. It contains original, usually monothematic works from the humanities fields, dedicated to certain historical periods or dealing with certain topics or phenomena approached from a modern evaluative perspective. The thematic issues include especially Studia Historica, Studia Sociologica and From Auxiliary Historical Sciences (Z pomocných věd historických), Miscellanea Logica and Miscellanea Musicologica. It is published twice a year.

The Ibero-Americana Pragensia yearly is an academic series issued by the CUFA Centre for Ibero-American Studies and published since 1967. It was the first academic periodical published in Spanish in Central and Eastern Europe. It contains studies from the field of history, literary sciences and linguistics, and to smaller extent ethnology, art history, philosophy and other social sciences.

The annual is supplemented by a number of monographs, source editions and contributions presented at conferences on Ibero-American themes.

The series issued by the CUFA Institute of Prehistory and Early History is dedicated to Central European archaeology and has been published since 1938. It is concerned with prehistorical to early historical issues and contains both monographs and thematically focused issues containing contributions by different authors

The journal is the descendant of Psychology in Economic Practice (Psychologii v ekonomické praxi), a recognised specialised periodical that had been published by Charles University for 43 years. It contains original contributions on psychology and related disciplines. The prioritised fields are: educational and school psychology, work and organisation psychology, social and developmental psychology, health psychology and clinical psychology. The new journal enriches the range of covered topics with contributions relating to the study of psychological themes linked to various applied fields or cross-culture themes. It is published as a double-issue twice a year.