Globalization and the Limits of Imperialism. Ancient Egypt, Syria, and The Amarna Diplomacy 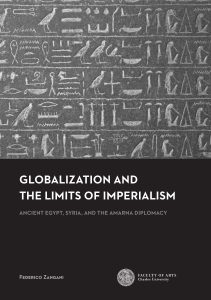 This book investigates ancient Egyptian imperialism in Syria and the origin of the Amarna diplomacy at the time of the 18th Dynasty, during the earliest phase of globalization in world history, the Late Bronze Age, by addressing theories and debates in the fields of Global History, International Relations, and political science, and with the inclusion of comparanda from Classics as well as modern and contemporary history. Contrary to Egyptological consensus, this book argues that the primacy of the Levantine cities in international relations, diplomacy, and global networks prevented the creation of an Egyptian empire in the northern Levant, and forced the pharaonic monarchy to participate in a diplomatic system of foreign origin. Therefore, this study offers an Egyptological perspective on the problematic nexus between imperialism and globalization, and argues that Late Bronze Age globalization imposed limits on imperialism that manifested themselves in Egypt with the Amarna diplomacy.