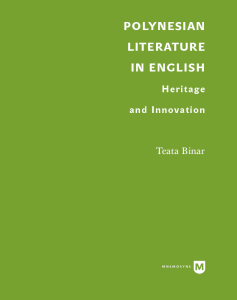 Polynesian literature in English is defined as post-colonial literature written by Indigenous writers living in the former colonies of Great Britain in the geo-cultural area of Polynesia.
It emerged in the 1960s as the articulation of the resistance of the Indigenous people against colonial hegemony and as the expression of their struggle for self-assertion. Polynesian writers are increasingly liberating themselves from the norms of Standard English and of the Western literary tradition, and integrate their languages, oral tradition and cultural heritage in these imported tools. They blend the Indigenous and the European colonial inheritances and, thus, innovate them. The resulting “syncretism” is the proclaimed creative principle of Polynesian post-colonial cultural identity reconstruction as expressed in this new literature.