Continuity, Discontinuity and Change. Case studies from the New Kingdom to the Ptolemaic and Roman Era 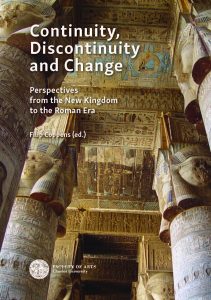 The volume focuses on different methods and strategies employed by individuals and/or communities when confronted with major changes in society and its reflection in the material culture. The first part concentrates on developments and transformations observable in New Kingdom private tombs commissioned by non-royal individuals in the three main cemeteries of the time – Amarna, Thebes and Saqqara – during the period immediately before, during and after the “Amarna age”. The second part of the volume centres on various strategies of adaptation and modification, as reflected on the level of the priesthoods and the design of the temple program (architecture, text and image) during the Ptolemaic and Roman period.