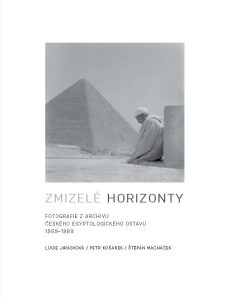 The book is mapping the history of Czech Egyptology especially through the photographs, which were taken in Egypt by the photographers of the former Czechoslovak, now Czech, Institute of Egyptology. It is structured in three basic chapters – decades, which include several groups of photographs for each decade of the first 30 years of the existence of the institute. They are thus divided into the groups of pictures focusing on Czech excavations, life in the countryside, Cairo, journeys to other sites or journeys from Prague to Egypt and vice versa. The rich pictorial contents are complemented by texts, which tell the story of Czech Egyptology not only from the point of view of excavations and famous discoveries, but also from the point of view of basic working and problems that occurred.