New satellite atlas of the pyramids has been published 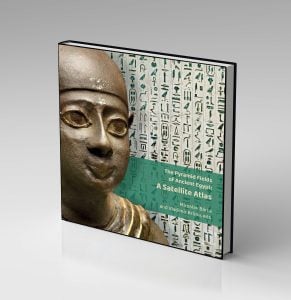 The Czech Institute of Egyptology (Charles University, Prague) has just published THE PYRAMID FIELDS OF ANCIENT EGYPT: A SATELLITE ATLAS. Topography and spatial and temporary development of some twenty historically unique pyramid sites are reviewed and discussed in detail by leading archaeologists and Egyptologists based on the latest high-resolution specifically commissioned satellite images.

The principal aim of this publication is to provide for the first time a detailed scientific interpretation of high-resolution satellite images of all Old and Middle Kingdom pyramid sites of ancient Egypt. The sites included in this Atlas represent to a large degree the principal sites of the history of the Third to Thirteenth Dynasties. Their particular characteristics mirror the specific periods of Egyptian history and in a way may be considered as genuine time capsules providing fascinating windows into the incredible story of ancient Egypt.

The sites include (starting in the north): Abu Rawash, Giza, Zawiyet el-Aryan, Abusir, Saqqara, Dahshur, Mazghuna, Lisht, Meidum, Lahun, Hawara and Abydos. The site of Abu Ghurob with the two sun temples of Userkaf and Nyuserra of the Fifth Dynasty was also covered as well as the so-called minor step pyramids dating from the late Third – early Fourth Dynasty which start in Seila at the northeastern edge of the Faiyum Oasis and include those of Zawyet Sultan, Nubt (Naqada), Abydos (Sinki), Hierakonpolis (el-Kula), Edfu (Ghonemeia) and Elephantine.

The individual sites are characterised on the background of their local topography and changing nature of their development over time as reflected by the position of all their principal monuments, including the principal ones – the pyramid complexes of the Old and Middle Kingdoms. The individual chapters focus on the dominant royal and non-royal tombs, their locations and their significance both within the site and with regard to neighbouring sites with pyramid complexes. Each chapter and each site provide a different story in terms of its structure and content. This reflects the fact that every site developed under different conditions, in varying local settings, had its own internal logics, its pace and its genuine characteristics. Each site also witnesses a specific historical situation and tells a different story of its development and rediscovery.

The latest technological advances in Egyptology, including satellite imaging, ultimately translate into their systematic use in site protection and management, site and landscape analysis and long-term strategies of both ongoing and future archaeological excavation and survey projects in Egypt. As for now, most pyramid fields are more and more intensively endangered by modern development. Despite all current outstanding odds, however, the pyramid fields of Egypt represent the very substance of Ancient Egyptian civilisation which came down to us and deserve our utmost attention, respect and care.

This book aims to serve both as a tool for orientation in the world of famous ancient Egyptian pyramid builders and as a succinct summary of all the latest data and understanding of the respective sites and the given historical periods.

The publication is available through Oxbow Books