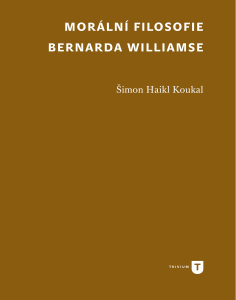 The book is divided into three parts. In the first part Bernard Williams’ internalist interpretation of reasons for action is presented. The second and third part deal with sceptical and constructive aspects, respectively, of his moral thoughts. This structure follows chronological order of Williams’ writing. The internalist theses precedes both his major sceptical piece Ethics and the Limits of Philosophy, and books Shame and Necessity and Truth and Truthfulness, where some
of his more positive accounts are to be found. There is, however, also systematic reason for such an ordering. The internalist theses is, in a sense, fundamental for Williams’ thoughts. Many other topics treated in the second and third part of this book echoes it and could be viewed as its ramifications.