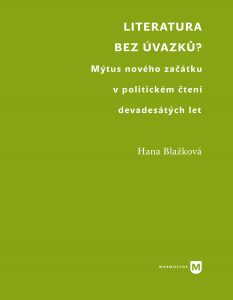 This book aims to analyze Czech literary criticism of the 1990s from the perspective of political reading and tries to find the reasons for the depoliticization of the Czech literary field. It disputes the thesis that literature was stripped of its social roles and commitments at the beginning of this decade and focused only on its literary values. In the first section, the basic tendencies of Polish literary criticism are introduced: these form a contrast to the Czech context. The second section defines political reading as a practice that has been present in literary scholarship since at least the 19th century and points out its possible contributions to the Czech literary scholarship. The third section discusses the following terms:
politics and police (Rancière), depoliticization (Schmitt, Barthes) and ideology (Eagleton). These are adjusted to the specifics of the Czech context. The last part of the book provides a political interpretation of the critical reception of three novels by Michal Viewegh. Reception becomes the main focus here: the debates around these novels include covert political messages such as the fight for claiming the historical narrative of the previous political regime, the disputes over positions of the individual actors (critics, scholars, writers), or arguments over the concepts of high and low literature. These reflect the helplessness of the literary field, caused by the pressure of the commercialized book market. This part also looks at the debates on the so-called authentic literature and program manifestoes of the early 1990s that were going on in this period.