The Pyramid Fields of Ancient Egypt: A Satellite Atlas 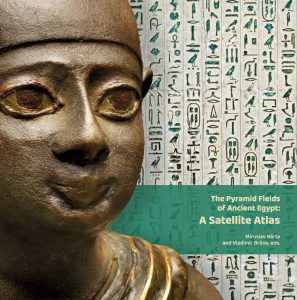 The principal aim of this publication is to provide interpretation of a high-resolution satellite images of all Old and Middle Kingdom pyramid sites in Egypt. The sites included in this Atlas represent to a large degree the principal sites of the Third through the Thirteenth Dynasty. Their particular characteristics mirror the specific periods of Egyptian history and in a way may be considered as a genuine time capsules providing fascinating windows into incredible story ancient Egypt once was.

These sites are as follows (starting in the north): Abu Rawash, Giza, Zawiyet el-Aryan, Abusir, Saqqara, Dahshur, Mazghuna, Lisht, Meidum, Lahun, Hawara and Abydos. Included was also the site of Abu Ghurob with the two sun temples of Userkaf and Nyuserra of the Fifth Dynasty and the so-called minor step pyramids dating from the late Third – early Fourth Dynasty which start in Seila at the northeastern edge of the Faiyum Oasis and include, proceeding those of Zawyet Sultan, Nubt (Naqada), Abydos (Sinki), Hierakonpolis (el-Kula), Edfu (Ghonemeia) and Elephantine.