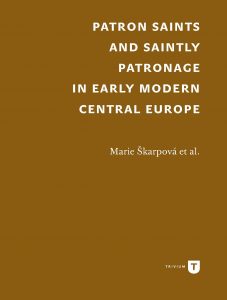 Even though the cult of patron saints is still viewed as an integral part – or even a distinctive feature – of Catholicism, it is not defined by any of the Christian dogmas. Since this is the case, what has made patron saints so constantly
popular? The interdisciplinary edited volume Patron Saints and Saintly Patronage in Early Modern Europe wants to contribute to the searching for answers to this question. The introductory chapter aims to present the early modern Central European sources as a valuable material for the research of the phenomenon of saintly patronage. Especially within the early modern period, not only the newly established Protestant churches, but also Catholic (Roman) church – both of them criticising various aspects of the Late Medieval cult of (patron) saints – offered various new conceptualisations of sanctity and saintly patronage, particularly in Central Europe, which was a meeting place for many Christian confessions. The concept of saintly patronage as a Christian religious practice allowing for the appealing image of centuries-long stability comes under criticism in the first part of the book, entitled Dynamics of Saintly Patronage. On examples particularly from Central Europe it analyses the intricacy of the process of establishing saintly patronage, the strategies for popularising the cults of patron saints, and the modifications of the patronages of a particular saint. Additionally, it focuses on the forgotten cults of patron saints and on their re-creation.